As we were staying since end of february in la Martinique Island (french caribbean), we
decided to go give a visit to our friends in Venezuela in june 2001.

They live in Puerto la Cruz, near Barcelona, 30 minutes far from Caracas by plane (5 hours by car).
We staid 2 days at Puerto la Cruz in order to visit the islands next to Puerto la Cruz, then went south
to stay 3 days in an old hacienda in a cacao plantation. If you go to Venezuela do not miss that !!

You can contact for any information Mr. Billy Andress Esser Bonta at : bukare@cantv.net, who is the sun of
the owner of the hacienda bukare (Phone : 094 652003 Fax : 094 652004). You will really enjoy your stay there.
In the middle of the jungle, and be able to visit the plantation and taste different cacao products !!!!!!!!!!!! They
can take you to visit part of the delta, with so many birds and dolphins !!!!!! Exceptional really !!

From there we visited the Orenoque affluents. Then we staid one more day at Puerto la Cuz for
one more visit to the islands.

Well, first of all, I want to tell taht I did not see any mouse cowrie at all, not even an old beached one.
I had a bunch of pictures with me of the Cypraea mus with me to show to local fishermans. They never saw such shell, even on the beach. One man had seen it but it was north Caracas. So we could say that mus cannot be found in south Venezuela.

I found many beached specimens of Cypraea zebra, like the one on the right (first picture). Most of them were litterally exploded with parts all around ! I only found one live specimen. In fact the coral formations
are really compact and it is very difficult to look under. I only looked under the huge pieces of dead coral one meter ahead the giant coral formations.

The only Cypraea cinerea live I found, is a green one due to aberrant algae attack, the mantle covered all the cowrie though.

On the Faro island, I found a spot where there were many huge dead Voluta musica. I saw only one live trying to bury in the sand. They are enormous (60-70 mm), always orange. Anyway on the other isalnds i also found such spots.

I did not see any conus, even beached (only one very very old Conus that could be a mindanus). Of course there were many shells on the rocks, near the beaches, or in few cm deep. I did not take any. I found a giant Ranellidae species : 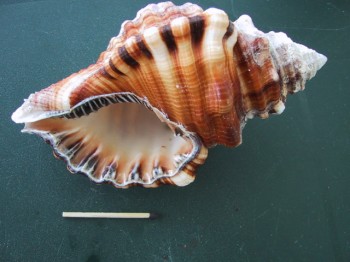 When we went south, we stopped at a fisherman's village. They use to sell shell for eating. Here are what they sold us : Muricidae, Strombidae,…